What Is Drill Press?

The spindle grips the drill from a chuck, controlled by 3 handles that are radially movable in accord, and brings down the drill onto the workpiece surface.

In order to use a drill press for various hole-making purposes, you must know its types, functions, and significances.

We are going to explore the various types of drill presses in the following:

The upright drill press is known for heavy duty drilling tasks. The machine usually works with a geared drive spindle-head.

The upright drill press is popular for making larger holes on the workpieces such as woods, metals, or resins. Technically, such drilling involves the larger or heavier parts of the machine.

You may find some upright drill press with automatic table-raising mechanism, which makes it even easier for the operator to drill the workpiece perfectly.

Next, comes the upright sensitive drill press, which works the drilling mechanism in light-duty drilling tasks. This type of drilling machine involves a belt drive spindle-head.

Any light to moderate duty drilling is possible with an upright sensitive drill press. This type of drilling machine only functions on hand-feed. You can still drill on the lean brass-metals, woods, and resins while getting effective holes to serve your purposes.

For being a hand-feed mechanism, the operator can feel the drilling or piercing through the workpiece with a sensitive drill press.

The upright sensitive drill press is available in floor style or bench style.

Being reputed as the work horse in the drilling machine arena, the radial arm drill press would be a great choice for heavy and versatile drilling works.

When working with a radial arm drill press, the operator doesn’t require raising the workpiece towards the drill, rather he can set the spindle right over the workpiece. Its spindle works on power-feed. The radial arm can work automatically for lowering and raising.

Amazingly, its wheel-head can move back and forth along the radial arm, making it much convenient to drill on multiple places of a workpiece.

You, as an operator can drill diagonally into the workpieces as the radial arm drill press has an option of tilt-table option. It means, you can equip a trunion or a tilting table for making angular holes into the workpiece easily.

Apart from the basic and regular light-to-heavy duty drilling operations, a drill press may be needed for some special hole making works such as multiple holes at a time, or making the tiniest holes on a workpiece.

Let’s check some of the special drill press machines below:

If you long for making asymmetric holes into the precious workpieces, then the gang drilling machine is the thing for you.

A gang drilling press has a fascinating disciplinary function. Usually, a gang drill press contains 4 drilling heads equipped above a single table. Each drill-head has its unique task to do on the same workpiece.

Simply put, the first head on the queue spots the drill on the workpiece surface, while the next head taps the spot. The third work head taps the hole and the last head chamfer the hole for smoothening the hole’s edges.

For a speed drilling and compact spacing, the micro-drill press is the right choice. It gives an accurate drilling on workpieces for a fine finishing.

The name suggests that a micro drilling machine is small and typically workable on bench-top. These machines are popular for small drilling works as they are efficient in handling smaller mechanism parts.

Its chucks are only capable of clutching small drilling tools.

Otherwise known as the multispindle drill press, a multiple spindle drilling machine is well-known for its several spindles equipped to the primary work head.

Whether for saving time or for multiple hole making requirements, multispindle drill press is an ideal machine. If a workpiece requires several holes in close spaces, the multiple spindles will drill down the workpiece simultaneously.

Generally, such drill press is used for meeting the requirement of large quantity of workpieces, and those in need of close-distant holes.

In this type of drill press, several drill heads reside on the chuck in a clock-wise design.

Every drilling head allows the next head to drill once its work is done. Each drill head consists of different type of piercing tool for distinct cutting into the same hole.

Today, the turret type drilling machine is computer-run as it’s necessary to position the table swiftly and appropriately before drilling.

A drill press commonly has some basic parts that team up to back the overall functions of the machine. Let’s get to know about those parts and their functions:

The head is the part where the spindle resides. The head enables the spindle’s vertical movement onto the workpiece.

The head is responsible for adjusting the drill height, speed, and feeds.

Spindle rotates the drill and controls it throughout the drilling operation. It is considered to be the most significant part of a drill press.

The arm, which is attached with the column, holds the spindle. The spindle can move up and down conveniently due to its return spring.

A chuck is positioned under the spindle, which keeps the drill bit in order.

A drill chuck is the device that wedges the cutting tool or the drill on the spindle. The chuck varies in keyed, keyless, or hybrid functions.

These different types of chucks are used for versatile drilling works. You will find this part useful for holding the drill in variable torques: tightened or loosened.

Drill or the drill bit is the main cutting tool that pierces through the solid workpiece surface by the help of a spindle. A drill is a rotary intersecting tool, which cuts through the surface in a diagonal maneuver.

Upon the invention of electric drill press, things have turned more efficient lately. So, a motor is the main power unit, which fuels the electric drill operation. It’s generally attached at the upper-back of the machine.

The power transmission sources from the v-bolt and the pair of pulley stacks set in a faceoff position. Obviously, the power is generated from the electric motor and transmitted to the spindle for the drilling operation.

The pulley stacks maintain the speed of the spindle.

The table of a drill press is where you would lay your workpiece for the drilling. A table is a horizontal and strong frame made of cast iron, plywood, or hardwood.

A drill table can be of various sizes depending on the size and amount of your drilling work. The table can be fixed or movable for the drilling convenience.

The iron or steel foundation that holds the whole drill machine above is known as the base. It supports the column and makes sure the overall operation is stable.

A T-slot is equipped onto the base so it can hold the bigger workpiece tightly to it. The base formation can be flat on floor or mounted.

The column is the backbone of the drill press machine as it maintains the table as well as the drill head. Its cylindrical cast shape makes it firm enough to support the radial arm for sliding upward and downward.

It’s positioned at the backend of the base and the electric motor is set atop it.

The very first drill bit, the taper and countersink bit is mostly popular for its ability to create screw shank holes into the workpieces.

Besides appropriate screw shank making, it makes a perfect flush for the screwhead to settle in a perfect torque on the hole-surface. You may adjust the collar around the bit vertically so the screw hole is made in the proper depth.

Forstner bit is used for flat-bottom drilling holes, overlapping holes that creates mortise, or partial intersection deepening off the board-edge.

A Forstner bit usually consists of a saw-tooth rim or a plain rim, which is available from 3⁄16 inches to 4 inches.

The self-centering bit is a spring-nosed drill bit, which enables the screw settle into the hinge leaf. The drilling encounters a retraction.

One of the commonest drill bits in the hardware stores is the twist bit. It has a 118° tip, which is able to drill into plastic, metal, and wood.

When drilled, the hole encounters tear-out due to wood fibers on the periphery occurring by the cut

A brad-point bit is an ideal bit for an unwavering drilling. Its sharp edges intersect cleanly through the workpiece while accomplishing a smooth side-walls.

It reduces the tear-out possibilities and leaves a counterbore in the bottom.

Spade bit can be used for short-term construction related wood projects. However, you may not prefer these bits in carpentry drilling.

It offers a smooth hole as the centerpoint guides it through the drilling process and the outer spurs lessens the tear-out of the hole edges.

What to look for in a drill press for metal

Key Factors to Look for When Choosing A Metal Drill Press .

When it comes to a drill press, size does matter. Important Note:10” table will have a 5” throat. If you wish to drill a hole in the center of a 12” piece of metal, you will need a drill press with a 6” throat. 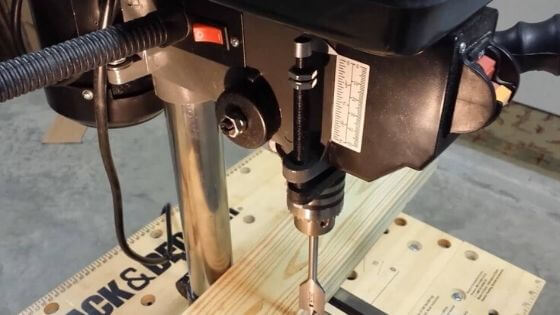