Headers are an important part of your Chevy 5.3L performance engine, and they can be difficult to choose. Do you go with the long tube headers or the shorties? They both have their advantages and disadvantages. If you’re ready to start shopping for headers, here’s what you need to know about the differences between long tube headers and shorty headers.

Headers are the first stop for exiting exhaust manifold gases from the engine of the vehicle. Although some people interchange the term manifolds and headers because of this, they function differently.

Design and makeup of the headers are two of the key factors in the performance of any vehicle because otherwise, the RPM will vary which will lead to varying performance.

Therefore, choosing the right headers for the establishment of your vehicle’s engine will create a huge impact on the torque and horsepower of the engine.

So, in this article, we will be learning about headers and both the kinds of headers: long and short tube, as well as find out which one is the best fit for your engine.

How to Change 5.3l Lifters without removing heads

Headers are also known as “extractor manifolds” or “tubular manifolds” depending on their location. Headers are comprised of several tubes that connect to each of the cylinders of your engine so that they can help to extract the exhaust out.

When your stock exhaust manifold is made out of cast iron or stainless steel, then headers can produce a variation in the materials. But when the stock manifolds are prone to get practical, then the pipes of a general header will seem bold and wild.

Headers make an extended tube for each exhaust of the cylinders to go into and it relieves the created back pressure (when all cylinders are nulling into the same space simultaneously. Every individual pipe will then come together and turn into a collector pipe.

But they will come out into the collector tube several times because of the spacing of the collector tubes. Headers are the directors mostly as they make sure each cylinder can use the collector tube in turn so that it can help to prevent back pressure as well. In this way, headers improve and enhance the performance of an engine.

Don’t get the wrong ideas about shorty headers from their name because they are only short compared to long tube headers. But it has a much longer tube as opposed to your exhaust manifold.

No matter what vehicle you are driving, short headers should be a reasonable step up from the exhaust manifold (existing). With shorty headers, you may have to make an additional choice between the equal and unequal length headers.

Shorty headers refer to just that: a header that is shorter than the stock header on a vehicle. The key advantage to shorty headers is that they will not interfere with the upper arm or ball joint on your vehicle.

The disadvantage is that the exhaust gas is not contained very well in the cylinder head, which can cause a loss of power.

Are short headers as loud as long?

Shorty headers are used to replace a car’s exhaust manifolds. They’re also referred to as “shorties,” “shorties” or “collector tubes.” They can improve a car’s performance by lessening backpressure on the engine and increasing airflow.

The latter is best for high-performance engines because it uses two separate exhaust pipes for each cylinder bank instead of one single pipe for both cylinders banks combined.

Shorty headers will actually reduce under-hood temperatures which will make your engine last longer. If you’re building a high-end road racer that needs to meet strict noise restrictions, then these are the best choice.

Long tube headers are the best fit for track cars or other vehicles that spend most of their driving time in the top end of the RPM range.

Long tube headers are longer than stock, which gives you more room for better exhaust gas containment. This leads to greater power gains over shorty headers. Long tube headers also help your car perform better by allowing it to breathe more efficiently, which can increase engine life as well.

The downside is that some cars will have clearance issues, especially bumpers and suspension parts like upper arms and ball joints.

This is why long tuber headers are not legal in fifty states. But the sound is another reason why they are frequently not 50 state legal.

Although many enthusiasts still love the sound of an exhaust manifold that is fitted with long tuber headers. But if you have neighbors around you, then it can hardly be a choice for you because of the sound issue.

These long tube headers tend to be incredibly noisy and loud. But long tube headers can also be more challenging to install because they will take a longer period to work with the remaining components of your exhaust.

Long tube headers are the traditional choice for muscle cars and street machines. They produce good low-end torque and they’re easy to install, but they do tend to be noisier than shorty headers.

There is a lot of confusion about the difference between long and short headers. They are not interchangeable parts. The long tube headers offer more power than the shorty headers and are also lighter.

The shorty headers are less expensive than the long tube headers, but they can limit performance. The advantage of long tube headers over stock manifolds is that they provide a smooth transition for the exhaust gas to travel from one cylinder to another without losing speed or velocity.

Shorty headers can be mated with stock or long tube exhaust manifolds, while long tubes require a specially designed header collector to work properly. This reduces their ability to handle high RPMs, although it’s still easier to make long tubes handle those speeds than it is shorties.

This results in a faster car. Short tube headers vs stock manifolds is a matter of preference, but some people choose them as they look sportier and more aggressive.

The disadvantage of shorty headers is that they tend to rattle if you do not install them properly. Some drivers experience problems with the catalytic converter heating up too much under high temperatures if they have shorty headers installed.

Long tuber headers require having to engage with a more complex method of installation according to the aspects of the exhaust manifold system.

Though the basic steps are similar to shorty headers installation. But there are some additional steps that you need to follow in the case of long tuber headers which make this a more complex installation than the shorty headers.

You have to uninstall the oxygen sensors here and do other complex aspects of the exhaust system to occupy the same space as the previous exhaust manifold.

Shorty headers can be a great choice for people who are searching for a little extra performance in their car or who are currently driving a turbocharger.

Long tuber headers tend to increase their turbo lag eventually because of the length of their headers. It may also harm your performance when you are using a turbo.

But when you are looking for a substantial performance gainer for your track driving, then this day beast long tuber headers will be the perfect match as a long-term service provider for you and your engine even though it may take longer times to install.

Which Brands Are Recommended?

If we are to recommend the brands of shorty and long tube headers, then we will suggest you go with proven and reliable brand names for better performance and upgrades.

A company like Hooker Headers, BBK Headers, Gibson Headers, Hedman Headers, Pacesetter Headers, and Kooks Headers are the top names in this industry who can provide high-quality materials and high-standard products.

These are the three models we would love to recommend as follows:

Shorty or Long: Which One is better?

Choosing the right headers plays an important part in enhancing the performance of your vehicle’s engine and therefore you have to choose between two basic options which are shorty and long tube headers.

The basic difference between them is the length of the exhaust tubes or pipes.

In the case of shorty headers, the port tubes merge into a single one and start exhausting in a much shorter distance.

But for long tuber headers, the port tubes are longer and they marge in the farther outer distance. Therefore, both of them take an impact on backpressure in the exhaust manifold system differently.

Longer tuber headers result in lower exhaust manifold back pressure and it means a boost or enhancement in horsepower as well as better oxygen intake.

Shorty headers deliver their best performance in an idle mode to the range of mid-RPM. This is what builds them the right headers for cars and other vehicles which count on the power of low-RPM.

They are more like a work pickup or a daily commuter that shows a lot of hauling and towing. So, in a word, shorty headers are the better ones between shorty and long tube headers.

If you’ve never installed a performance exhaust system on your vehicle before, you might not know that the primary reason to upgrade your exhaust is to increase the amount of horsepower (HP) and torque (TQ) that your engine produces.

But in the case of the longer tubes, there won’t be a choice to make and therefore the longer tubes won’t make extremely loud noises which will disturb your neighbors and the people around you.

Yes, shorty headers are usually a little louder than a long tube. Depending on the stock exhaust manifold, shorty headers may have longer tubes as well. Then it won’t make an extremely loud sound but still, it will sound louder than the longer ones.

Yes, shorty headers are better than stock manifolds. Shorty headers don’t produce the same amount of low and mid-range power as the fuller ones.

But they do give significant power gains over exhaust manifolds. They also have the potential to produce bigger and higher RPM power gains. You can easily maximize the performance of your shorty headers by selecting equal-length tubes.

Are shorty headers worth the money?

If you are driving a turbo-boosted engine, then you will certainly want shorty headers. But they are also capable of providing great service to a variety of other drivers.

In case you are looking for increasing and enhancing the performance of your car and vehicle which is your daily commuter and driver as well, then shorty headers are worth your money.

Shorty headers are more involved from an installation point therefore with headers in a combination with a cat-back system, they can provide you a reasonable boost in power. So, in most cases, fuel mileage may remain the same or increase a little.

The best choice for headers will depend on your intended goals for your vehicle’s exhaust system upgrade. If you want increased horsepower at low rpms (think: off-the-line acceleration), you’ll want long tube headers that provide maximum surface area for exhaust gasses to flow over.

Shorter lengths give a better performance and torque as compared to longer lengths. Long tubes result in an increased gas velocity as compared to the short tubes. Therefore, there is a decrease in oxygen content inside the cylinder which gives an extra boost to your car’s engine power and also results in a more efficient fuel utilization. 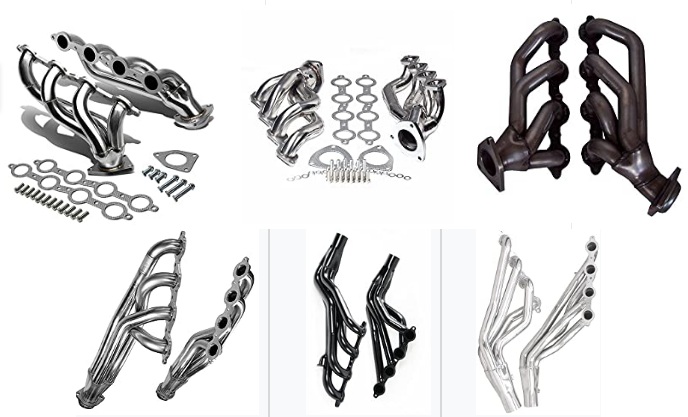