When you’re looking at socket sets you’re going to see six point socket or twelve point socket and that just means how many sides are on the socket?

So a 6 point socket is going to go over a standard hex nut or bolt.

A 6 point end is hexagonal in shape and moreover, at a 60-degree angle, it can equally space around a circle.  And a 12 point socket is going to go over the same nut or bolt in twice as many positions so much easier to use in tight spaces. (Check prices here)

A twelve-point touchline is known as a double-hex or double-hexagon. That means it has twelve points or pinnacles that can constantly be spaced at thirty-degree enhancement around a band. This geometry will also fit on a 6-point fastener. (Check prices here)

If you look at the twelve versus the six the key differences here are this is a twelve it’s much easier to put on the nut.

That being said, if you can only afford one set of sockets, get the 6 point socket

6 point is a little more difficult to put under the nut.  But if you notice here your contact area on a nut on a twelve point is right here on these little points and it basically connects the nut right at the point on the nut.

It’s very good because it’s very quick and it’s very easy to install on the nut.

But the contact area is not that great as opposed to a six point.

It does allow a greater contact area so if you’re dealing with a nut that has slightly rounded off corners or is very tight this would be the way to go the six point.

So that’s really the prime difference these are a little easier to install onto a nut and you have a shorter term but here is this is just a little more solid and you can get a much tighter fit on the nut.

12 point sockets are best for tight areas where you have limited space to move the ratchet handle and need shorter throw.

If you are working in a tight area, you can always turn the socket partially and eventually get it to get the correct access. An added note, there are differences in the steps of ratchets also. Some higher end ratchets have more steps, but you can strip a ratchet just like you can a head.

When you first start out buying tools you want to start with a six point socket. 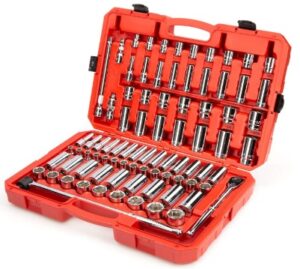 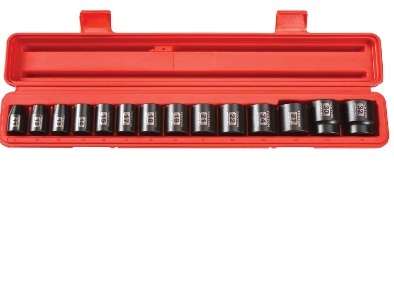 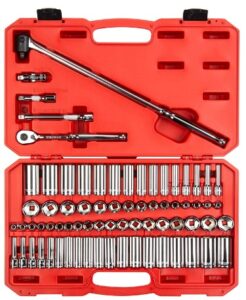 12 points are okay if you aren’t torquing much and need an easy connection, hard to see, hard to reach etc.

Do you know what are 12 point sockets used for?

It is great for use in tight spaces as they allow you to connect to a fastener at more angles.

For general use 12 points work just fine. If much torque is needed, 6 is the way to go.

What is the advantage of a 12 point socket?

What the pros and cons are to each one (12pt vs 6pt sockets)? Obviously I will include my personal thoughts but this is all subjective when it comes to 12 point vs 6 point sockets.

For heavy torque applications whether you’re really torquing something down or breaking it fastener to loose twelve points usually good for light duty stuff. 12’s are good for tight spots.

The six point is going to be a lot less likely to slip or round off a fastener because if you don’t know the points are not what is grabbing really the fastener that’s not where the torque is being applied in the corners.

Sixpoint have thicker walls on the side and they have less points.

Because they’re already thick they need to be thicker to absorb that torque they have thicker walls that are designed to contact the fastener away from the corners on the thick walls.

6 point rounded corners and edge to allow the socket to easily slide onto the fastener.

12 point it’s obviously a lot more points so it’s a lot easier to get on the fastener and then obviously twelve points have a good use.

The answer to this question hugely depends on your preferences and requirements. If you want a socket for lightweight repairs mostly, then a 12-point socket will be perfect for you. But in case you won’t slide out an obstinate attachment or circle over the edges, then 6-point sockets are the right match for you. So, as you can see both of them has different agenda and therefore they perform differently to fulfill various requirements of the users. This is why we can’t just declare one of them better as their functionality is different.

Six-point bolts have broader walls than twelve-point bolts. Therefore they are unlikely to drizzle. A six-point bolt is modeled to touch the top of an attached far away from all the edges so that only the broader portion of the attachment gets contacted. It will decrease the chances of sliding and circling the edges dramatically. The corners of the socket are gradient back several degrees to permit the sack to slip comfortably over an attachment. Here the gradient on a 6 point bolt is lesser than a 12 point bolt and it gives more touching space inside of the sack.

What are 12 point bolts used for?

Most of the time, a twelve-point nut is used for higher and better clamp load. Usually, a twelve-point screw could be watched in the gas and oil production because of all the niche heads of nuts. You can’t see all of these when both of them are fastened together in the final nuts. Twelve point screws are also used in prevailing the applications of the engine.

What are 12 point bolts called?

Twelve-point nut is the common name of Twelve-point Head Flange Screw Cap. It also has another name which is “ferry bolt”. The spine measurement as well as the broadness of the twelve-point nut are similar to the peak extent of a sack cap head nut. Therefore it allows the twelve-point screw to become a substitute for any kind of application which demands a head sack screw cap.

To provide details about the look of a fastener in writing is a tough job as it is a thing to learn practically. But we are trying to give you at least an idea about the look here. A twelve-point nut’s head design is a fastened screw that is tightened with a twelve-point sack wrench so that it can permit torques in higher amounts and they get to be utilized as a standard central hex sack drive head nut cap. To get a better look at a twelve-point attachment follows this link:

12 Point fastener heads are often found on special high torque applications like head bolts (aircraft). It is also found in tight locations that make using a six-point difficult to find enough swing to get it to fit.

My thoughts are six-point is obviously better for high torque and anytime I can I will use a six-point unless it’s a 12 point fastener then I’ll use twelve points.

12 Point fastener heads are often found on special high torque applications like head bolts (aircraft). It is also found in tight locations that make using a six point difficult to find enough swing to get it to fit.

My thoughts are six point is obviously better for high torque and anytime I can I will use a six point unless it’s a 12 point fastener then I’ll use twelve point.